Reclaim Earth is set in the year 2025, five years after the planet suffered an alien attack. With less than 1% of the Earth’s population having survived on-board a space station, the time has come to mount an attack and reclaim the planet.

Though the game is set in 2025, its intentionally low resolution recalls the likes of DOOM and Duke Nukem 3D, QUAKE and Turok. I did my best to complement Reclaim Earth’s striking look with four tracks that perfectly evoke (and update) the sound of late ’90s and early ’00s sci-fi shooters. The EP is imbued with themes of loneliness, survival and hope, with anxious chords underpinning dense layers of dancing synths lines and busy percussion.

The game was developed by a team of three (Anthony Sturdy, and James Brunner II aka Man Over Mars and I) for LOWREZJAM 2016. LOWREZJAM is an annual event in which the challenge is to create a game with a resolution of 64×64 pixels.

Speaking of pixels, I wanted to shy away from that and decided to hire an artist illustrator to concept the album art from scratch and Ms. Laura Onderwater delivered! 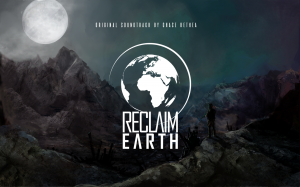 The EP comprises  synths and guitar riffs composed and performed by me and additional guitar was contributed by my friend, Rene Gonzalez Slizewski. Rene is a talented composer who loves scoring film (particularly horror) and more.

The game is available as a pay-what-you-want title on itch.io: as-games.itch.io/reclaim-earth

As for the EP, it was released to mark Earth Day and can be bought and streamed on all major music services, including Bandcamp, Spotify, YouTube, Apple Music, Amazon, and more.