I am so pleased and excited to announce that I am one of the keynote speakers for Global Game Jam. If you are participating this year and you’re looking for inspiration, I crafted this for you.

The Global Game Jam is the world’s largest game creation event taking place around the globe, typically at physical locations. A “game jam” is essentially a hackathon focused on game development. Global Game Jam stirs a global creative buzz in games, while at the same time exploring the process of development, whether it be programming, iterative design, narrative exploration or any artistic expression. It is all condensed into a 48 hour development cycle.

The GGJ encourages people with all kinds of backgrounds to participate and contribute to this global spread of game development and creativity. My first Global Game Jam experience wasn’t the best. I went to the USC location in Los Angeles because this was the closest location to me. I was very excited as peers had told me to participate. I packed up all of my equipment, a sleeping blanket, a pillow and drove over an hour to the jam site. I met a few people before the announcement /theme reveal so things seem pretty promising. When the disbursement commenced, I walked around to people and asked if I could be on their team,  and I was rejected every time. People were already brainstorming and working on their ideas and I felt completely left out. I was crushed and so I went home that night.

In 2019, I decided to give the Global Game Jam a second chance only because it was in a different location which happened to be in a much smaller location. I had been to this location before because they had game dev meetups. Smaller attendance but I made it on a team and the experience was much better. I was happy to have the experience redeemed.

To take it to the next level, to be asked to be a keynote speaker of Global Game Jam is something I could not foresee. I have been doing a lot of guest speaking lately but recently took a back seat to slow down and refine the process. Turns out, I was in the top three selections of being a keynote speaker when Tim Cullings asked me. I had never done a keynote before but I have attended and seen a few. Austin Wintory was the first keynote I had seen at Game Sound Con 2012, then Marty O’ Donnell some several after that.

Since I have never written a keynote before, I had to do some research that was given to me from the previous speakers. I have always been a good writer all through college and my previous talks show the high potency of quality I bring to the table. So my formula was to

It took me three days to write the keynote. By this time, I had already watched all but three previous keynote presentations. My penultimate goal was to make it inspirational for the jammers and to clarify the benefits as well as misconceptions that had been buzzing online about jams in 2020.

It’s still an honour to be asked to be a keynote speaker for Global Game Jam. Those that have presented before me are legends in the industry such as Robin Hunicke (Co-Founder & CEO of Funomena,) Kyle Gabler, (Game Developer of World of Goo) Keita Takahashi (Developer of Katamari Damacy / We Love Katamari), Jenova Chen (Co-founder and Creative Director of That Game Company – Flow, Flower, Journey, Sky), Guy “Yug” Blomberg (Creator of The GIG, Co-Owner of The Mana Bar) and more. I believe I am the first keynote speaker to represent as a Video Game Composer for the Game Audio community too. This is saying a lot especially since it could have been literally anyone. So, it means a lot to me that I was in the top three to be asked/chosen.

So, are you ready to watch? (maybe you already did) Here is the link. Enjoy! 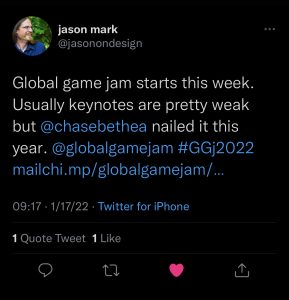